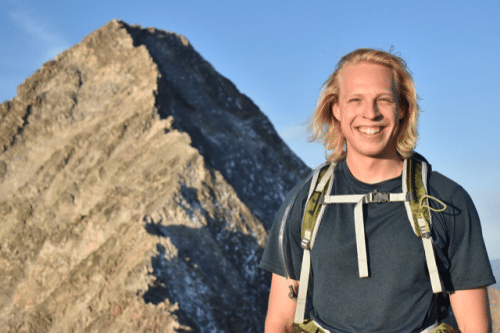 Dane grew up in northern Colorado but didn’t appreciate the outdoors until he moved away to Los Angeles to study film for a year after high school. Realizing he made a huge mistake, Dane returned to Colorado to attend school at CU Boulder (and to get crackin’ on the notorious 14ers). After completing the list over a couple summers and graduating with a highly employable B.A. in philosophy, he spent several months in New Zealand backpacking and scheming his next outdoor objectives. He returned home to become a ski instructor and begin a life of outdoor work until ar-mRNA-geddon struck and he was forced to bide his time inside, planning bigger adventures for the future. Since then he has put a few more mountain notches under his belt, and is thrilled to be a part of the AAI team. Aside from mountains, Dane is an avid reader, movie buff, Spotify addict, and connoisseur of riddles.