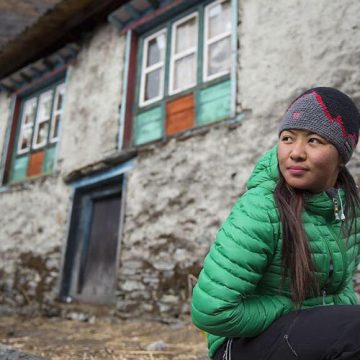 Dawa Yangzum Sherpa is the only female climber from Rolwaling Valley, home to more than 70 other notable climbers and Everest summiteers. She has been a frequent competitor in ultra-marathons including the 350 km Everest Sky Race and Annapurna Mandala Trail. Dawa started working as a trekking guide in 2008 and began climbing in 2009. Since taking up climbing, she has summited Mt. Everest from the south, Yala Peak, Island Peak, Ama Dablam , Cho-Oyu from the Tibet side and also worked as a climbing ranger on Mt Rainier. In 2014, Dawa successfully summited K2 as part of the first Nepalese female team. She also works as instructor at the Khumbu Climbing Center in Nepal.

Dawa was recently featured in Outside Magazine.

Could not have been better! Our guides instilled enormous confidence in us, made us feel completely relaxed, while at the same time keeping us humble and mindful of the seriousness of our endeavor.