From our Everest Basecamp Trek: Overall, this was an experience beyond my expectations. In the past, I have found that an Alpine Ascents expedition, whether a climb or a trek, has been the envy of other groups – and this trek was no exception. Every aspect of the trek was first-rate.

Described by the legendary American mountaineer and photographer Galen Rowell, as the “Throne room of the mountain gods”, our K2 Trek takes us deep into the heart of the Karakorum range.

Long regarded by mountain climbers as one of the most spectacular regions in the world, our journey takes us thru wild and dramatic landscapes of granite towers, vast glaciers and giant 8000 meter peaks. This is an intrepid mountain trek in a largely undeveloped mountain region. Our adventure is greatly enhanced by the company of our good natured and hardworking Balti porters and Pakistani guide staff.

The K2 base camp trek is an intermediate level adventure from a physical s suited to experienced trekkers. Much of the journey involves walking on the Baltoro Glacier, over rugged terrain ( no experience needed) , for up to 9 hours each day. Accommodation during the trek will be in shared tents, using established camping sites along the way. We will descend the same route over 4 days of walking, before loading in the jeeps for the return drive to Skardu.

Our trip begins in the Northern Pakistan city of Islamabad and takes us through the heart of the rugged Karakorum mountain range bordering China. Islamabad is a vibrant, modern city and the administrative capital of Pakistan. K2 basecamp is located on the upper Baltoro Glacier, home to the 4 most concentrated 8000 meter peaks on earth. K2 (8611m), Broad Peak (8051m), Gasherbrum I (8080m), Gasherbrum II (8035m).

This region of Pakistan is known as Baltistan and is uniquely independent with shades of its old Tibetan roots. The Balti people are an ethnic group of Tibetan descent and most are practicing Muslims. Prior to the partition of British India in 1947, Baltistan was part of the state of Jammu and Kashmir in the Northern Indian subcontinent.

From a recent trek: “Overall experience exceeded all expectations. Eric is a master guide; knowledgeable, personable, great communicator, tremendous leadership; he has it all, in spades. He is a great communicator, thoughtful, well spoken and extraordinarily knowledgeable, with great judgment as he lead and guided people through this experience. I have done several trips like this with other companies. This was clearly the standout; While everything was great, you have a superstar in Eric Murphy. He never missed a thing, his attention to detail was perfect and his ability to advise, share information, coach and support people through the climb was terrific. Kudos to all at Alpine Ascents and Eric Murphy!!!”

From Islamabad ( our arrival city) we board a short, but spectacular flight to Skardu, with views to Nanga Parbat (8126m), the 9th highest mountain on earth. Skardu is located in the Baltistan valley alongside the Indus river. Here we can explore the Skardu Bazar and Khurpucho Fort, before loading into jeeps the next day for our 9 hour drive to Askoli village. Askoli village is known as the gateway to the K2 region. Here we begin our trek, following the Braldu River valley to the to the majestic Baltoro Glacier.

We follow the 62 kilometer long Baltoro Glacier, one of the longest outside of the polar regions. This rugged geography was first explored, surveyed and mapped in 1861 by Henry Haversham Godwin-Austen (1834-1923), an English Lieutenant –Colonel. Upon gaining the lower Baltoro glacier just above 4000m, we pass by some of the most iconic granite Spires in the world, the Trango Tower Group. Great Trango Tower, Uli Biaho, Nameless Tower, all above 6200m. These peaks hold some of the most difficult big wall rock climbs in the world.

Further afield the route crosses to the middle of the Baltoro Glacier and we enjoy views of the West face of Gasherbrum IV (7952m) and Masherbrum (7821m). The West face of Gasherbrum IV, also known as the “shining wall”, is regarded as one of the most difficult alpine climbs in the world. 1st ascended over 8 days in 1985 by Polish / Austrian alpinists Wojciech Kurtyka and Robert Schauer.

Now reaching the upper Baltoro Glacier at 4650m we arrive to Concordia, the confluence of the Baltoro and Godwin-Austen glaciers. Here we are dead center in one of the largest glacier systems outside of the polar regions. The towering pyramid of K2 (8611m), the 2nd highest peak on earth, dominates the skyline to the North. The Abruzzi ridge climbing route is sillouetted on the right skyline. Turning to our right, looms the massive bulk of Broad Peak (8048m), 12th highest. We are truly in the throne room. We spend the next 2 days exploring the base camps of Broad Peak and K2, before beginning our descent back down the Baltoro Glacier and Braldu River valleys.

Approximate mileage on the trek is 126 miles, over 12 days, including 2 rest days. Elevation gain on the trek is approximately 6,300 feet (not including all the trail undulations) with the high point being 16,750 feet at K2 basecamp.

The Great Game: The Struggle for Empire in Central Asia

K2: Life and Death on the World's Most Dangerous Mountain

Both of them made great instructors and made mountaineering very easy to learn. From concepts of mountaineering to knots and other practical skills, they made the whole course very interesting and were very knowledgeable in a lot of subjects. 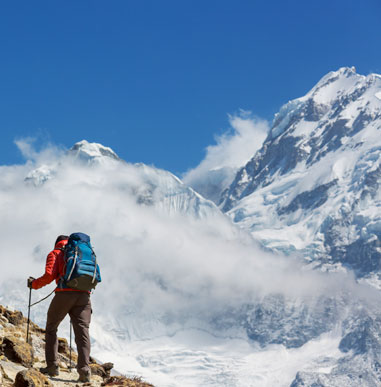