Once considered the highest mountain in the world, Nanda Devi continued to be “the stuff dreams are made of” as its reconnaissance and climbing lore never wavered. The two peaks and 1 and ¼ mile ridge make this one the most distinctive mountains in the Himalaya and largest mountain that resides fully within the boundaries of India. It took nearly 50 years of scouting to find the entrance into the Rishi Gorge and into the famed and absolute stunning sanctuary, eventually allowing climbers to make summit attempts. The climbing history of Nanda Devi are a web of great achievements (first summit in 1936) and then subsequent failures and political intrigue and CIA involvement worthy of an Ian Fleming novel. The trek to Nanda Devi requires travel by train, jeep and foot but it is well worth any time spent as we wander through the flowered fields and below waterfalls to reach our destination.

The Nanda Devi East Trek starts from the beautiful town of Munsyari (2290m) and the route ascends up the Gori Ganga river gorge which separates the Nanda Devi group from the beautiful peaks of the Panch Chulli group. You trek through the Gori Ganga gorge which is narrow initially, then opens up into the wide expanse of the gentler trans-Himalayan region. There are quaint Himalayan settlements on the way and villages like Burphu and Martoli have houses that are at least one hundred and fifty years old reminding every one of the extent of Indo-Tibetan trade.

The Milam Glacier-Nanda Devi trek includes a walk up the valley to the base of Nanda Devi, then following the trail further north past Milam village to the Milam Glacier in an ampitheatre of 7000 meter high peaks like Trisuli and Hardeol ending with a crossing of the 4750 metres high Brijgana Pass leading into the mysterious Ralam Valley. This pass and the Ralam valley are mentioned by W.H. Murray in his book ‘The 1950 Scottish Himalayan Expedition’. This trek allows you to visit some of the remotest parts of the Himalaya in the footsteps of some great Himalayan explorers with the bonus of seeing well known peaks like Nanda Devi East and Nanda Devi from a distance of as little as 3 kms.

All India programs are developed by Gordon Janow our native India expert. We are one of the few agencies to offer a highly supported trek. We also access many villages by foot, keeping in line with our desire to offer a unique and remote experience in Ladakh.

Simply one of the most beautiful and revered mountains in the world, Nanda Devi is a two peaked giant forming a nearly 2 kilometre ridge line. The climbing and recon history of the area, lies deep in the canon of mountaineering legend, most notably in Shipton and Tillman’s great work, Nanda Devi. Our trek leads us to Nanda Devi base camp and then on to an amphitheatre of 7000 meter peaks.

The area to Nanda Devi was inaccessible for many years but open for trekkers in all its glory. The peak is the highest solely situated in India and second highest after Kanchenjunga. The area is ringed by smaller mountains making the area difficult to enter and set the tone for the legendary recons trips in the golden ages of mountaineering.

Nanda Devi is located in the Garhwal and Kumaon area in the eastern corner of India’s northern Himalayas, bordering Nepal to the east and Tibet to the north. It was the playground of famous mountaineers like Longstaff and later Shipton and Tillman who marvelled at the beauty of this region, surprisingly ignored by western trekkers. Much of Kumaon including the high pristine valleys that lie just south of the Tibet border were opened to trekking only in 1994 when strict ‘Restricted Area Permit’ requirements were lifted allowing access to the base of the Nanda Devi peaks from the east.

We travel to Nanda Devi East via Milam Valley through which the Gori Ganga river cuts an impressive 25 kilometer gorge. This was an important trade route between the fertile crop growing valleys of the Kumaon and Tibet, busy with mule and yak caravans until 1962 when the Indo-Chinese war led to the border being sealed. Milam village at the head of the valley, had over 500 households, most belonging to rich traders who also controlled the extensive wheat fields around Milam giving it the name of ‘Johar’ or golden grain. With trade having come to an end, most families moved to towns and cities in the plains with the houses and fields of Milam overtaken by weeds. Its past importance however led to a reasonable and partly paved trail being constructed through the gorge giving easy access to the upper Milam valley and the side valleys that lead to the foot of 7340 metres Nanda Devi East.

Love and Longing in Bombay

The God of Small Things

I feel the monasteries of Sikkim are unlike any other.We learned a lot, had a memorable and exotic experience and loved meeting all the people we did! They all worked so hard to make our experience the great time it was, especially Yatish. Thank you for all your advice during the time we were arranging […] 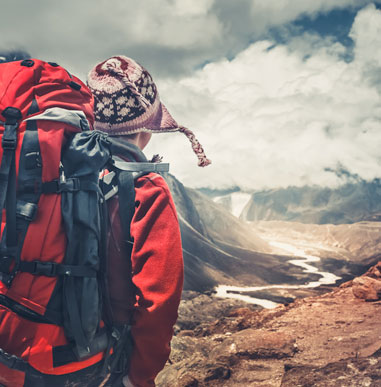