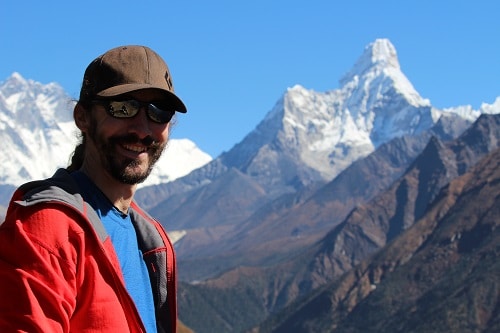 Don started climbing on the east coast over 20 years ago, and has been guiding for the last 12 years. He is proficient on technical routes on snow, rock, and ice, but spends most of his time guiding snowy routes on some of the world’s largest peaks. Don has first ascents on rock in Newfoundland, and he is one of only a handful of people who have climbed a floating iceberg. A memorable moment in Don’s career was when a stray dog joined Don’s expedition and summited Baruntse with the team, making her the first and only dog to have ever climbed a 7,000 meter peak. In 2021, Don lead an expedition to the summit of Mt. Everest.

Don has a master’s degree in education. He enjoys teaching climbing and avalanche courses, and helping clients reach their goals. He has lead trips in 10 countries, but currently spends most of his time in Washington, Alaska, and Nepal. When he is not in the field, Don enjoys traveling with his wife and their rescue dog, rafting the world’s most challenging rivers, and renovating his home on the Olympic Peninsula.

If you could only take one album on an expedition?
Megalithic Symphony – AWOLNATION

If you could be stuck with anyone (past or present) at base camp for a week?
my dog Maeve

What was your first mountain?
The graduation climb of the Explorers Club of Pittsburgh’s mountaineering school – Mount Washington in March of 2006

Yes – this was an incredible trip and the quality was as good as it gets. The guides were amazing and I really enjoyed the time spent out there.