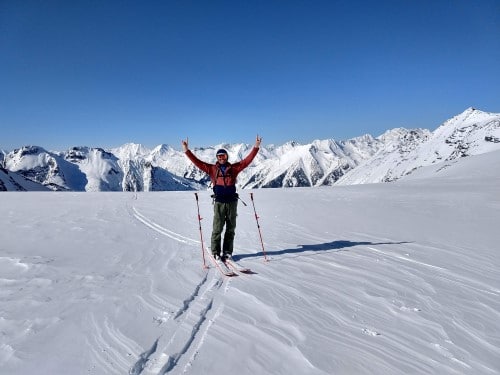 Shane was born and raised in Colorado, but the flat part, east of Denver. Working as a whitewater raft guide in Buena Vista, Colorado on the Arkansas River was Shane’s intro into professional work in the outdoors and mountain culture. From there, he went on to ski patrol at Copper Mountain and Squaw Valley before eventually moving to Seattle, WA. Shane started ski guiding in 2012 and now works year round ski guiding and mountain guiding around the world, but mostly in the Pacific Northwest and Canada. On his days off, if he’s not skiing or climbing, you might find him at a favorite coffee shop in Seattle with his Bernese Mountain Dog or if his wife is lucky, working on a house project.

Most beloved book?
Shane – Jack Schaefer (the movie / book I was named for)

What’s always in your snack bag?
The bar I’m least excited about that’s been there for several months, but I’ve yet to run out of food on a trip to necessitate eating it.

If you could be stuck with anyone (past or present) at base camp for a week?
My wife. Is that sweet or cheesy?

Most people don’t know that…
I’ve been on two different reality TV shows.

One piece of advice for aspiring mountaineers?
Invest in good footwear.