Join Alpine Ascents guide Vernon Tejas as we take on the jungles of Papua New Guinea and attempt summit of PNG’s highest peak Mt. Wilhelm and the continents highest volcano Mt. Giluwe (part of the Volcanic 7, highest volcano on each continent). These are non-technical climbs but demanding, remote trail climbs and the chance to explore the inner reaches of Papua New Guinea.

After flying into PNG, we travel by jeep to the base of Giluwe and take on an ascent the following day. After summit of Giluwe we travel through the rugged mountains of the Simbu Province to our launching point for Mt. Wilhelm; Betty’s Lodge. Our trek takes us through thick forest, past beautiful lakes, to the base of Wilhelm where we will camp for the night. A long climbing day will take us to the summit around dawn and then descend back to camp. The summit views are said to be stunning viewing a rarely seen part of the world. It is likely we will be spend time with tribes along the way and view traditional dance. This is a rare journey into a remote and relatively lesser traveled part of the world, and attraction for those with both the climbing, lifestyle and travel spirit of the remote.

A prior climb such as Baker, Rainier or Kilimanjaro recommended. This is a non-technical climb.

What is the skill level of this climb?

What is the physical conditioning for this climb?

Climbers are expected to be in excellent physical condition.

Any tips on how a climber can maximize their chances of success?

Will I be sharing a tent or lodging with other climbers?

On the climb, you will be sharing expedition tents. You will share rooms on this expedition in town, but you can pay a higher fee for single rooms. Contact our office for information on single-room supplements

How much will my pack weigh?

What gear will I need?

How does your gear rental system work?

Any further advice on gear and using your gear list?

While all items are required there may be times when some of the items on the Gear List may not be used (such as warm weather or changing conditions). The Gear Lists are created by the guides to assist in having climbers be prepared to summit in any conditions.

While it is impossible for us to list all brands for certain gear, we do offer a wide variety of equipment in our Gear Shop that has been hand-picked by our staff of mountaineering experts. Please feel free to call our offices with any gear questions or substitutes. Plastic boots are required for this climb.

How is drinking water treated?

During the trek, we will provide unlimited amounts of water at mealtimes. Team members can fill up water bottles at meals and use their SteriPen to sterilize.

Can I bring some food from home?

You may bring power bars, Gu, or similar high-energy foods. Alpine Ascents will provide all meals on this climb.

Are there any innoculation requirements?

Not at this time. We do recommend you visit the CDC website for the most up to date information.

What is the best air route to my destination?

Detailed flight information will be sent to you upon registration.

When should I book my flight? Do I need to use your Travel Agent?

Fares are generally less expensive when booked early. You may use our travel agent (Charles Mulvehill 1-800-727-2157) or book flights your self. Please note that flights booked online are often difficult to change. Please send us a copy of your flight schedule as early as possible as this allows us to book pick ups and hotels.

Where do I meet my guides?

What if I arrive early or depart late? Can you arrange extra night lodging? Is there a single room option for this expedition?

We are happy to make arrangements such as personalized tours, extra hotels rooms, airport pickups, and arrange for private rooms. Please indicate that you would like a private room on your application and we will contact you with information on single-room supplement costs (for hotels only).

Are there any entry or Visa requirements?

Not at this time. We will work with you to secure a visa for PNG.

Is there any communication while we are on the mountain?

Regular updates are posted on our website once teams are on the mountain.

Can I contact the others on the climb? How about the guide?

You can always call our offices and one of guides will contact you, generally about one month before your trip departure. Thirty days prior to departure, we mail a list of other team members to you.

How much should I budget for this expedition? How much cash should I plan to bring?

$500 should easily cover any extra expenses and tips. Most climbers prefer to bring about $1000 and have credit cards.

How much should I tip my guide and staff?

Guides are permitted to accept and greatly appreciate tips. Contact our office for specific guidelines for your trip.

How do I register for this expedition? What paperwork do I need to send in?

You may call our offices with a credit card or mail/fax an application with a check or credit card number. Balances are due 120 days prior to departure.

When is the money due for this expedition? What kind of payment do you accept?
What is your cancellation policy? What is your refund policy?

Each deposit and balance payment is nonrefundable.

Note: Alpine Ascents reserves the right to waive any fees. As we offer personalized service, we will attempt to accommodate changes and cancellations when necessary, waiving certain fees when feasible.

Our Alaskan Yak Tours were honored by Outside Magazine as Trip of The Year!

On the road to Mount Wilhelm

The term "Mudmen" of Papua New Guinea's Asaro tribe, also known as the Holosa, refers to a tradition of a costume centered around masks made of mud. They live nearby the village of Goroka in the Eastern Highlands Province of Papua New Guinea. 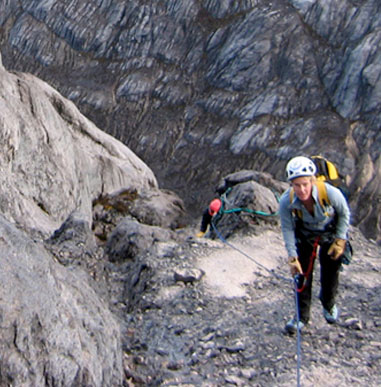