Why Climb With Us

Totally enjoyed the expedition. The logistics and process were well thought out and easy to deal with. It was a pleasure to follow Ben and Lakpa – easy to be part of the team. Very patient and happy to help me. All the staff were fabulous. Pretty hard to think of a way to improve it – really happy with each aspect of the trip. –  Cho Oyu climber.

Our reputation for leading climbs in the Himalayas is superb and includes summits of Cho Oyu, Ama Dablam and Pumori. We’ve led more than a dozen successful guided climbs of Mt. Everest, with over 250 climbers reaching the summit of the world’s highest peak. Some of our past Cho Oyu climbs have had 100% summit success.

Some of the keys to our continued success:

Unlike many outfitters, we use our Nepali (Sherpa) guides to assist with the expedition. This can result in a much higher quality expedition.

Typically we operate at a 4:1 climber-to-guide ratio on this expedition.

We utilize the Alpine Ascents Himalayan Sherpa Team during the climb.

We believe there is no point in moving to a higher elevation unless climbers feel good where they are. Given this, we take the time needed early in the trip to establish a sound base of acclimatization.

A permanent Base Camp is established for the duration of the expedition.

All guides are equipped with radios for communication on the mountain.

You are The Climbing Team

You are the climbing team: Alpine Ascents keeps its Base Camp small, and does not use it to support or house self-guided or partially guided teams.

This program utilizes three bottles of oxygen on summit day. High-altitude oxygen systems are used for the summit attempt, during the night at High Camp, and for medical emergencies should the need arise.

Wi-Fi at Base Camp, satellite phones, and cybercasts: Our team enjoys Wi-Fi internet connectivity while at Base Camp, allowing our climbers to bring their own personal electronic devices. We also have satellite telephones during the entire climb. This provides direct emergency contact with home, and is our regular link to the Alpine Ascents office. This depth of contact can only be had with a well-established, long-term guiding company.

Our tight-knit staff is always available to answer questions and address concerns. It is not uncommon for family members to contact us during the climb for information. There is always someone available (on a cell phone during non-office hours) to handle lost luggage, make arrangements if flights are missed or delayed, relay messages directly to the team, or mitigate any of the numerous situations that may arise before, during, and after the climb.

We are aware of the delicate visa process for entering the area.

We also offer an extra oxygen and Sherpa support package.

Alpine Ascents provides family and friends the opportunity to follow our climbs as they proceed. Utilizing state-of-the-art technology, we receive regular audio dispatches from the climbers and post them on our website. Not only does one feel the excitement of watching a team as it moves up the mountain, the archived cybercasts provide an excellent resource and learning tool when researching expeditions. Enjoy the show!

Our guiding team is composed of world-renowned guides and full-time professional climbers. Many of these guides have historical climbing achievements synonymous with their names. They are part of Alpine Ascents because they understand and share our climbing principles. These individuals are dedicated to sharing their excellence with others. The role of an Alpine Ascents guide is to impart knowledge, use calculated judgment, and assist with individual climber development. Our guides are experienced educators who evaluate their strengths by the achievements of their climbers. Ben Jones and Lakpa Rita Sherpa guided our 2013, 2014, and 2016 teams to the summit and they look to do the same in 2019.

Alpine Ascents has a full Gear Department ready to assist with your climbing questions and preparations. We have a full-time gear staff and a retail store. All Alpine Ascents climbers receive a discount on each purchase in our Gear Shop.

I thoroughly enjoyed the expedition. Everyone was very supportive, considerate, and caring to the climbers on the expedition. Even though this is the first AA expedition where I did not summit, I will say it was one of my favorite in large part due to Ben, Lakpa, and Tshering. 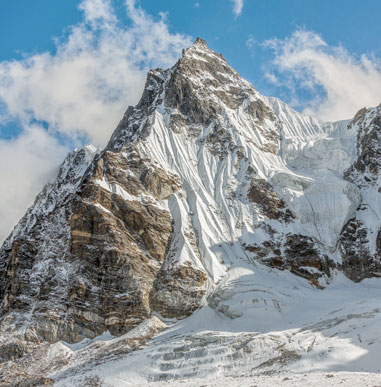