Why Climb With Us

Our guide was a natural teacher who truly loves to impart his vast knowledge and wisdom to amateur climbers like me. Everything from setting up acclimatization schedule, pacing the team, tips on personal care, and imparting technical skills culminated in our tremendous success. – Mera Peak Climber

While some outfitters take inexperienced climbers up the glaciated Mera Peak, we expect our climbers to have prior crampon and self-arrest experience. In turn, we treat this as a serious mountain climb giving respect to the climb as well as the goal of summiting. Alpine Ascents guides are revered as outstanding mountaineers, instructors, and cultural enthusiasts. The expertise of our guides fully encompasses climbing and trekking high peaks in the Himalayas. Our guides also have a passion for and knowledge of Nepal that is contagious and that will add to the already profound richness of this expedition. We are confident our expertise in this region is unsurpassed. We have been guiding in Nepal over the past two decades and have consistently run expeditions from year to year. Our familiarity with the region, combined with our expertise and knowledge around the world, lend a depth and richness to every expedition that we feel is unrivaled in the guiding community.

We are thrilled to have legendary guide Vern Tejas leading this expedition following Vern’s successful lead of our inaugural trip in Spring 2017.

Some of the keys to our continued success

Mera Peak is one of the few Himalayan climbs that can be done in three weeks. We use helicopters to minimize the amount of time away from home and which can save up to five days.

Alpine Ascents offers the most comprehensive program available, using a distinguished staff of Sherpa, four-season tents, and a diverse assortment of quality meals. Please note, though, that lodges and food are very simple as compared to other parts of the Khumbu. We will spend our nights before the climb in a fully stocked camp tent at Mera Peak Base High Camp, and we may use tents along the trekking trail.

Part of Alpine Ascents’ success is based on our small and select group of experienced guides. We’re fortunate to have close friends and an expert staff in Nepal. (Note: While guides are subject to change, your guides will be Himalayan veterans. This is what separates this expedition from others. You will have the opportunity to climb with some of the foremost climbers from the United States and Nepal. As noted, Vern Tejas is scheduled to lead the expedition assisted by Carol Tejas.

In addition to our Western guides, the trek will be supported by a team of Sherpa. We have been working with the same team for over 15 years, and our deep-rooted friendship with each member makes for a wonderful exchange of ideas, laughter, and assistance. Porters and yaks will move the majority of our gear and personal packs up the mountain, enabling trekkers time to fully appreciate the surrounding environment.

We lodge in Sherpa villages — many of them remote — giving us a rare look into traditional and monastic communities. Our lodging along the way is usually in tea houses, but we may use tents when appropriate. While the environs are often primitive by Western standards, they are balanced by the warmth and tremendous support of the Sherpa people. Our nights before the climb will be in a stocked camp tent at Mera Peak Base Camp.

All our treks will have a Cybercast (blog) page on the Alpine Ascents website, with either audio or text updates every few days, often with photos. Family, friends, and the public can follow the team on its trek from Kathmandu to Base Camp and back.

Alpine Ascents provides family and friends the opportunity to follow our climbs as they proceed. Utilizing state-of-the-art technology, we receive regular audio dispatches from the climbers and post them on our website. Not only does one feel the excitement of watching a team as it moves up the mountain, the archived Cybercasts provide an excellent resource and learning tool when researching expeditions. Enjoy the show!

Alpine Ascents has a full Gear Department ready to assist with your climbing questions and preparations. We have a full-time gear staff and a retail store. All Alpine Ascents climbers receive a discount on each purchase in our Gear Shop.

A Brief Overview of Sherpa Life

Often inseparable from mountaineering, the Sherpas of Nepal inhabit much of the lower portion of the Himalayas known as the Solu-Khumbu or “Khumbu.” While their reputation as climbers is nothing short of historic, local Buddhist, animist, and cultural traditions have equally nurtured and impacted a fascinating relationship with Westerners and Western thought.

Sherpas became prominent to the West when British mountaineers began to set their sites on conquering Himalayan peaks. With the first Mt. Everest expedition in 1921, the skill, expertise, honesty, and dedication of Sherpas as guides and partners became an integral part of Himalayan climbing. The affinity of outsiders for Sherpa/Buddhist civilization has blossomed into an ever-increasing sharing, understanding, and friendship between cultures.

Prior to British expeditions, Sherpas revered the great mountains of the region as dwelling places of gods and goddesses, to which the thought of climbing was considered blasphemous. (“Chomolungma,” the Tibetan name for Everest, is the residence of Miyo Lungsungama, the goddess of humanity and prosperity.)

Sherpas traditionally worked as traders, farmers, and religious folk. Along with these ancestral roles, leading climbs and treks has recently become a mainstay of the Sherpa economy. Sherpa refers both to a tribal group and a job capacity as porter, climber, or trek leader. The term “Sherpa” means Easterner, referring to their origins in Eastern Tibet. The migrations of this Tibetan culture began sometime in the early 1400’s. Today, the Sherpa population in the Khumbu is about 5,000, with a total of roughly 35,000 living in Nepal.

The first notable and successful Everest climbing Sherpa was Tenzing Norgay. In 1952, Norgay accompanied Raymond Lambert to within 800 vertical feet of the still unclimbed Mt. Everest. A year later Norgay was asked to join the British team led by Col. John Hunt that successfully summited Everest, following the same route as Norgay and Lambert. Norgay and Sir Edmund Hillary were the first climbers to reach the summit. By the mid 1980’s, Sherpas had summited Everest many more times than Westerners. Ang Rita Sherpa, the most well-known climbing Sherpa, had amassed seven summits of Everest by 1995. In 1993, Pasang Lhamu Sherpa became the first Sherpa woman to summit Everest.

The name Khumbu comes from its guardian deity, Khumbila Tetsan Gelbu. The literal translation is “Khumbu country god.” The teachings of Sherpa Buddhism talk of a spiritual understanding between all beings. This is probably why the level of hospitality and acceptance of Westerners comes naturally to the Sherpa. It should, however, be mentioned that Tibetans are also considered fierce warriors.

Amazing trek. Technical rope course and use of ascenders and repelling was really integral to climb so once we were on the Mountain it seemed like review. Safety was foremost, from personal care hydration, eating, acclimatization to carefully finding the best weather window to summit. – Spring 2017 Climber 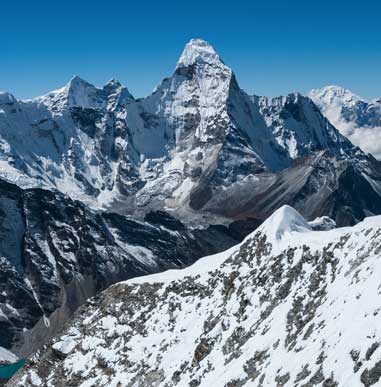