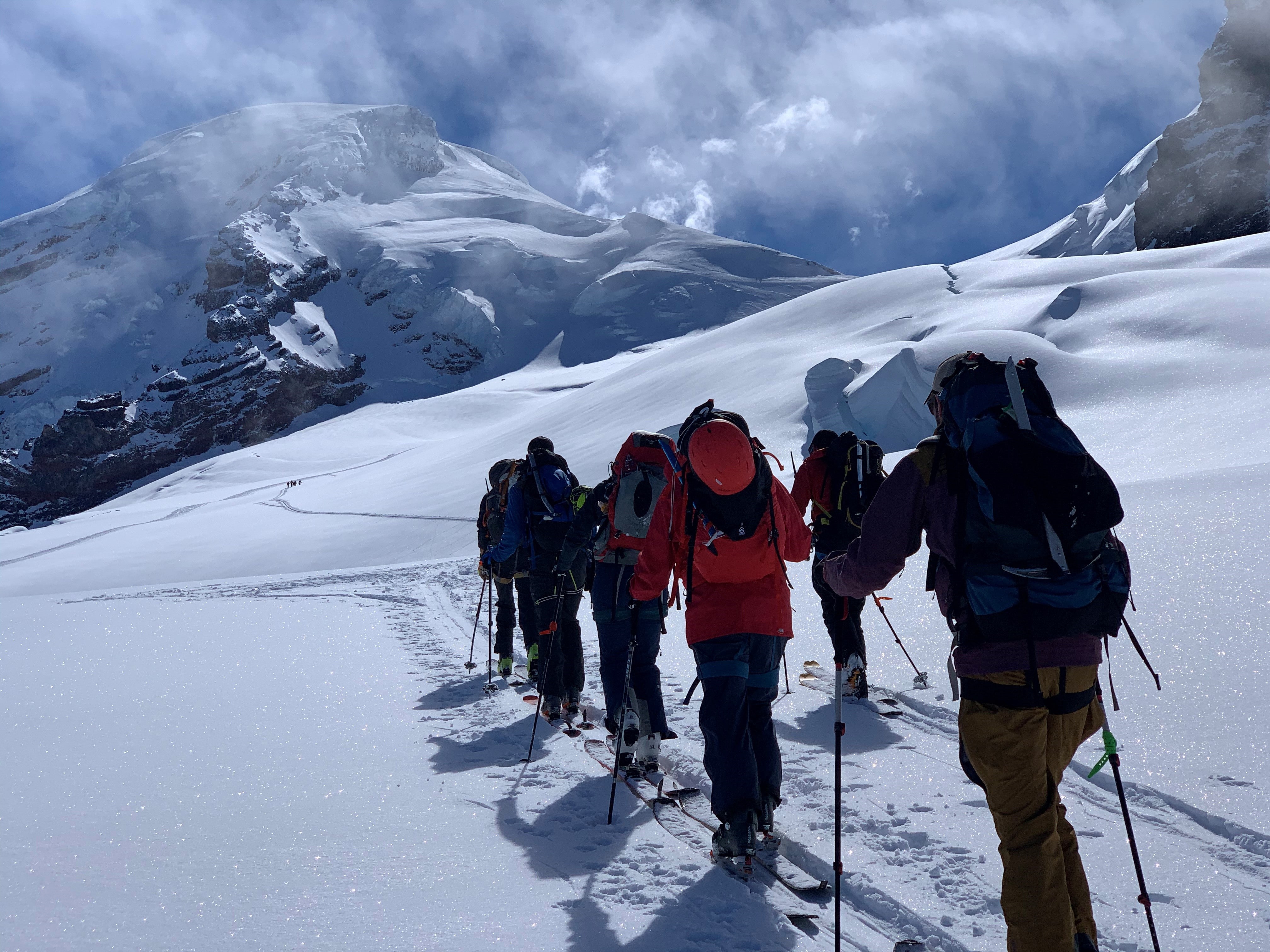 As we skinned our way up a snow covered forest road to the Heliotrope Ridge trailhead, we knew we were about to have a fun time on Mt. Baker, but we had no idea what a spectacular adventure we were in for. With heavy packs supported by fresh legs we made our way through dense old growth forest. The tree branches were eager to shed the weight of freshly fallen snow as we rustled by. Tight gaps through the trees and slippery terrain proved to be an initiation of sorts. Not long into our ascent to camp, a team member’s carbon fiber ski pole succumbed to the rigors of accessing the beautiful Mt. Baker backcountry. It became clear that old fashioned metal would be advantageous; a lesson that would later be confirmed by multiple carbon fiber tent pole failures, presumably caused by the large temperature swings between the cold of night and the heat of midday. Our guides, Bryce and Ian, quickly improvised and fashioned makeshift ski poles out of avalanche probes and repair kits. These minor gear failures aren’t uncommon and we remained undeterred and excited for an opportunity to climb and ski Washington’s third tallest peak. We arrived at camp slightly more experienced and knowledgeable thanks to the generous tutelage and enthusiasm of our guides for all things skiing.

Our group quickly gelled and spirits were high as we were surrounded by immense and stunning scenery. On our second day we were instructed in many different techniques that we would be using for our climb the next day, such as various crampon walking styles and skinning while roped up. Once we had covered all of the necessary skills, we made our way above camp to find pristine untracked powder. This was a chance to practice some of the skills we had learned in relatively forgiving terrain and, to everyone’s delight, to get our first ski runs of the trip. By the time we finished our first lap everyone had a huge smile on their face. The conditions were so much better than we could have imagined at a time when ski resorts were winding down their operations for the season. We marveled at our lines, looking back up at where we had just been with satisfaction and excitement for what the next day would bring. The skiing was so good that some of the group went for another lap before dinner. We compared notes on our dehydrated dinners and hot beverages before getting into our tents and resting up before the day we had been eagerly anticipating.

We woke up on the morning of our summit climb to the clearest skies we had seen yet on the trip. Our timing could not have been any better. Since we were going to be skiing down we didn’t need to get an early start so we left camp around 8 AM. The skinning started off very mellow and provided an excellent warm up for the day. As we gained elevation the views of the many subpeaks and the Coleman glacier dazzled and fueled our excitement to continue towards the summit. We roped up as we approached the glacier in what felt like an abundance of caution, but knowing that a crevasse might be hiding under soft snow, the added protection gave us some peace of mind. The smell of sulfur reminded us that we were on an active volcano brimming with heat and pressure right below the ice. Once we reached the saddle below the Roman Headwall the snow became much firmer and the angle much steeper so we loaded our skis onto our packs noting the pros and cons of A-Frame style, diagonal attachment, and one sided ski carrying. While many other climbers went unroped for this section, we enjoyed the additional safety provided by short roping. Ascending the Roman Headwall the knowledge and foresight of our guides (opting for a relatively late departure time by climbing standards) proved to be invaluable as the snow conditions were optimal. Other groups were descending and remarked how icy it had been during their ascents, meanwhile our crampons gripped into soft and forgiving snow up a well established bootpack. After a fairly sustained effort ascending the headwall we reached the football field and then the true summit. We gathered for a quick photo-op and then it was time to ski one of the most beautiful volcanoes in the world.

We cautiously entered our descent of the headwall with the understanding that a fall could be disastrous. As we descended the snow softened and the slope angle eased into excellent and ultra-scenic skiing above the clouds and rugged subpeaks. We were in for another fun surprise after skiing the headwall when Bryce pointed out where we’d be skiing next – the fall line of the Coleman glacier, a more direct and aesthetic line than most of us realized we would be skiing and where no other skiers had been that day. This was the cherry on top of the volcano sundae that made the trip feel extra special. As we neared our camp site the fog rolled in and it gave Bryce a chance to show us his fly fishing technique. With a rope tied to his ski pole he cast out the line to get a visual aid for better reference of the terrain immediately ahead of us in the whiteout conditions. We pulled into camp, packed up our tents, and skinned uphill towards our exit route. We cautiously skied out with tired legs and very heavy packs, finishing with fun tree skiing until we hit the road again. We reached our parked cars with a sense of accomplishment, satisfaction, and immense gratitude for the experience we had shared and the bonds of friendship that formed during our climb and ski adventure on Komo Kulshan (Mt. Baker).

Editor’s Note: Micah Sherman was a skier on our May 7 – 9 Mount Baker Ski Descent.