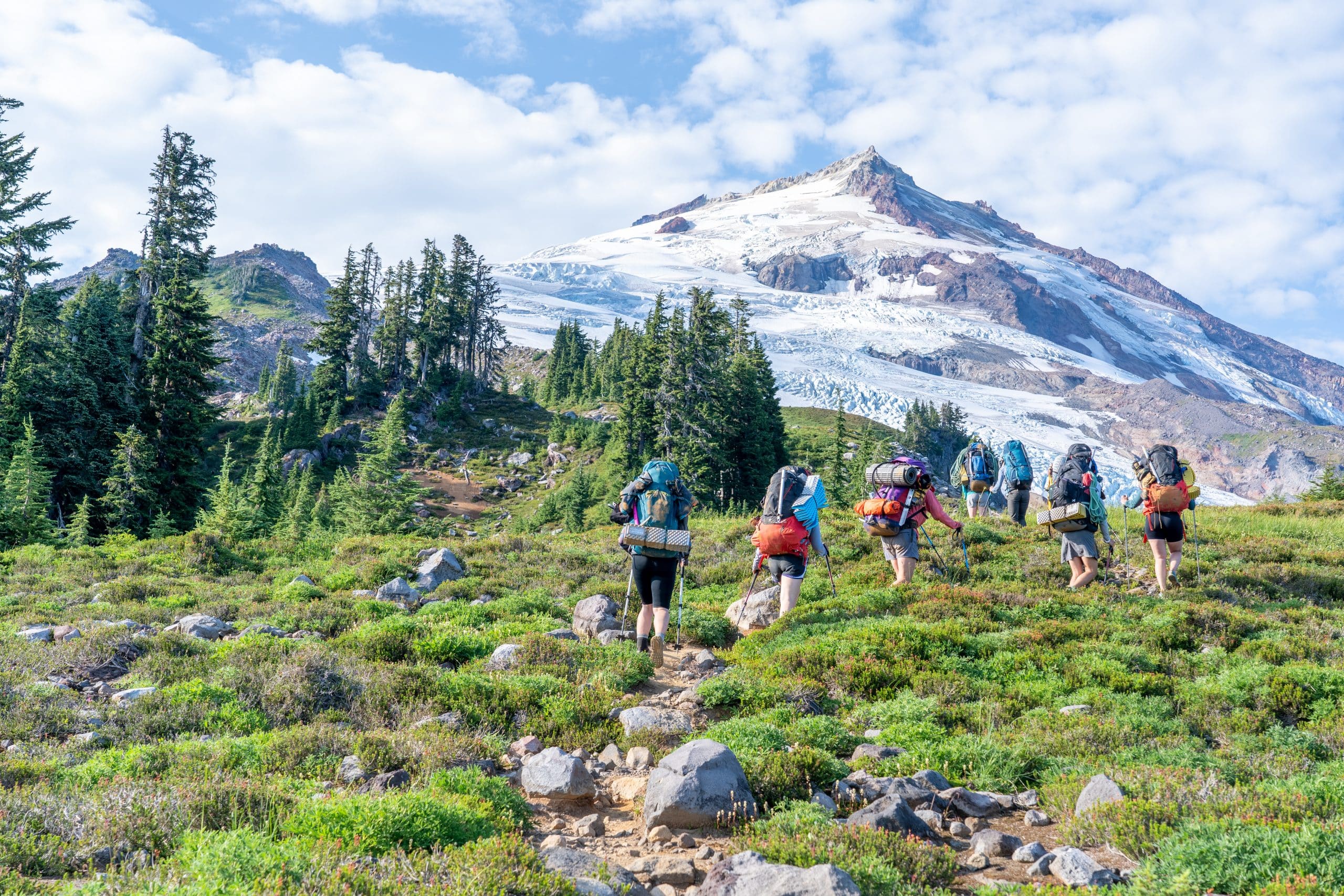 People often ask if it’s boring to climb the same mountain over and over again. Honestly, it doesn’t get boring, because the route is constantly evolving and it’s amazing to witness the life cycle off the flora and fauna throughout an entire season. While summiting a mountain is a laudable goal, it’s also important to enjoy the journey along the way. One way I keep myself entertained as I travel in the mountains is by staying attuned to the shifting prominence of the various plants. Some of the best advice I’ve ever gotten for mountaineering are from poet Gary Snyder: “Stay together, learn the flowers, go light.”

So in an effort to help you with Snyder’s suggestions, here’s a non-comprehensive field guide to some of the showiest native flowers you might see blooming around camp and along the trail on Mount Baker. There is plenty of Mt. Baker botany to be found!

Pink Mountain Heather
Phyllodoce empetriformis
You’ll find pink patches of heather spread around alpine and subalpine meadows in rocky soil. It really gets going in late June and early July once the snow melts and can resemble a pink carpet across hillsides. They’re basically low-lying shrubs with clusters of pink bell-shaped buds. On the railroad grade, a steep section of trail on the approach to our camp on the Easton route of Baker, the heather roots are instrumental in holding together the eroding soil of the lateral glacial moraine.

Spreading Phlox
Plox diffusa
You might not initially notice these white or purple flowers nested close to the ground amid their more showy neighbors the penstamon or heather, but once you see them you’ll be impressed by their symmetrical, free petals. You’ll find them in rocky, sunny spots, contoured to the leeward side of rocks or in crevices. They are what is known as a “cushion plant” which has adapted to survive on ridges with high winds, where soil has a hard time accumulating.

American bistort
Bistorta bistortoides
These dense white balls of flowers sit atop 3 to 6 inch leave stalks. They usually stink, but their smell draws flies for pollination. Native people eat the roots and shoots, as do bears and ungulates.

Mountain dandelion
Agoseris aurantiaca
These have smaller flowers and tend to stand a bit taller than their common relation, the yellow dandelion that you might find in your lawn. They’re fairly common all summer at many different elevations. Their seed parachutes look like dandelion seed globes. You might be able to make a wish with them too!

Lupine
Lupinus lepidus and Lupinus polyphyllus
In mid July to mid August, Lupines become the prominent showy species. Their broad, furry leaves capture dew drops in the rain, which is an adaptation to minimize water loss. These plants are part of the pea family and their seed pods are visible after the purple, columnar flower clusters disappear. Some of the best places to see thick clusters of these plants is right in camp!

Fireweed
Chamerion angustifolium
After the other flowers have gone to seed fireweed pops up 2 to 5 feet tall, bright against otherwise inhabitable land. It’s known as a pioneer species, often one of the first plants to crop up after wildfire, on roadcuts, in avalanche basins and more. It is most successful with mycorrhizal (fungi) partners. Native people have eaten its inner stems as a staple food, though it can have some laxative effects. In fact, all parts of the plant are edible, raw or cooked! Maybe collect a bit to add to an alpine salad.

Tufted Alpine Saxifrage and Spotted Saxifrage
Saxifraga cespitosa and S. bronchialis/tolmiei
You may see these tiny white flowers with succulent-like leaves amid the rocks near camp and along the trail. Some versions have pink and reddish spots, and other versions just have five white petals. Their buds can resemble joker’s hats. Their names derives from a European herbalist use: prescribed for breaking ups bladderstones (saxifrage means stone-breaker). Marmots like eating them, grabbing tufts in clusters and stuffing them in their cheeks.

Mountain Ash
Sorbus sitchensis S. scopulina
These large shrubs can be taller than a person, and are most showy once their berries turn bright red in the late summer and fall. Their flowers are white clusters that appear cloud-like compared to their sharp, waxy leaves. Though the berries are pretty and provide important forage for migrating birds and small mammals since they stay through the winter, but they taste acrid to humans. Apparently when the berries ferment on the bush, there have been reports of birds “flying under the influence.”