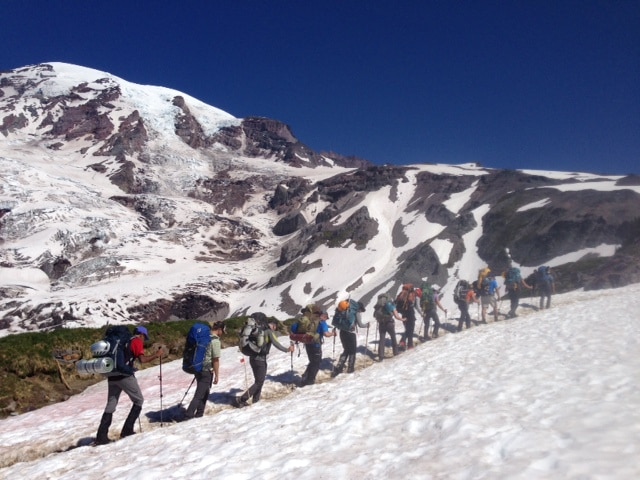 Easily the most common question we are asked is, “What kind of boots will I wear on my Rainier climb?” Here, we break down how we decide.

We use two main types of boots in Washington’s Cascades Range, which includes Mount Rainier and Mount Baker among other peaks: double boots and single boots. Briefly, double boots are more suitable to cold and wet conditions than single boots. We reserve single boots for warmer, drier, or warmer and drier conditions. Alpine Ascents runs a fleet of Koflach Degre double-plastic boots alongside a fleet of La Sportiva Nepal Evo single leather mountaineering boots. While there are other styles of boots out there (non-plastic double boots, uninsulated/non-leather single mountaineering boots/super-gaitered single boots), we’ll use the Degre and Nepal to explain how we decide which boots are appropriate.

Our Cascades season lasts from approximately May 1st to September 30th each year. Though every year is different, there are certain trends in our region. Let’s look at some data logged around Paradise, which sits at 5,400′ on Mount Rainier.

First, let’s start with temperature. While it isn’t the only factor in determining whether we’ll use single or double boots, it is important. As you can see, the average minimum and maximum temperatures we see at Paradise follow a bell curve with the July-August time frame

offering us both the highest high temps and the highest low temps. Note that this temperature is logged at 5400′, rather than 10,500′ at Camp Muir, 11,500′ at Ingraham Flats, or 14,410′ at the summit! It’s much colder at those elevations, but the month-by-month temperature trend holds true at elevation.

Second, let’s look at precipitation trends. Getting cold is not just about temperature, but also about being wet or dry. This is especially true of our hands and feet,

and so precipitation plays into our boot decision in a significant way. As you can see, July and August are not only our warmest but also our driest months on average.

We usually use double boots in May, June, and September. This is because it is typically cold and/or wet enough that single boots would not keep your toes warm enough during a big mountain climb. We usually use single boots in July and August for the opposite reason. It’s typically warm and/or dry enough in July and August that a lighter, more flexible single boot will provide enough protection from the expected weather and conditions.

That said, even though we often use single boots in July and August, we still sometimes need to use double boots due to singularly cold, damp, or cold and damp forecasts. It’s possible to see forecasts shift within the course of a single week, so it’s important when selecting boots to use the most up to date forecast available.

Finally, it’s worth mentioning that people do summit Mount Rainier in less-insulated boots than we use. These climbers are either able to move very quickly (thus needing less insulation), or are willing to accept greater risks to their toes on the mountain. Though it is rare, climbers can get held up in traffic jams or be forced to be stationary for hours. From time to time the glacier can shift significantly during the course of a summit bid, meaning that several hours are required while we work to find a re-route. In 2017, for example, a large section of glacier shifted on the Disappointment Cleaver Route resulting in a brand new, half-mile-long ice cliff. It took hours to address the situation, and the climbers stuck uphill of the ice cliff sure were glad for the extra insulation for their feet. Never forget when selecting your footwear that Mount Rainier is a serious mountain…and that having cold toes is uncomfortable!