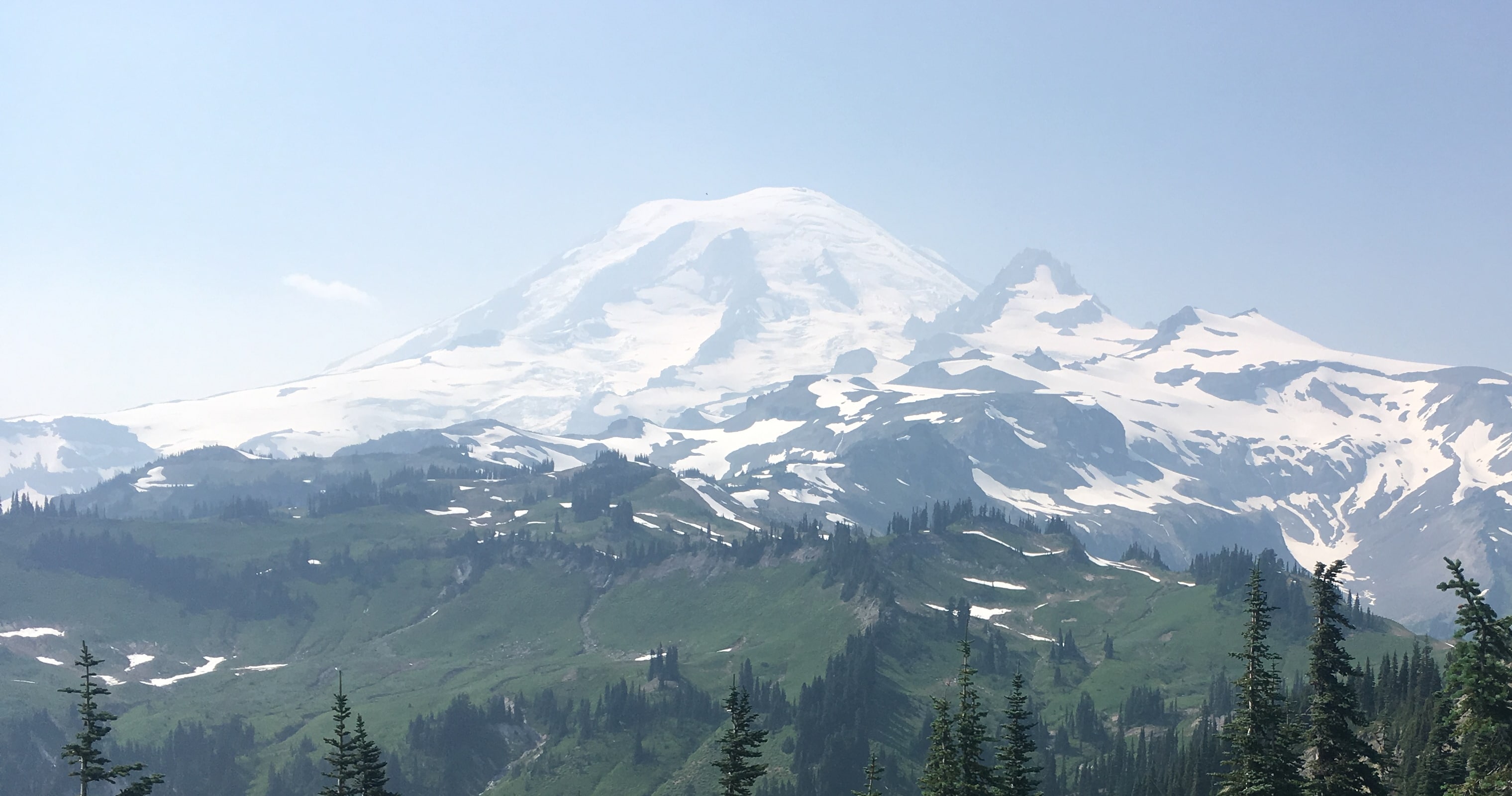 Alpine Ascents climbs Mount Rainier from May through September. We are often asked which dates to choose, so here we break down the merits of each month.

Mount Rainier can be climbed year-round. For climbers willing to adventure, even the more challenging shoulder seasons can provide interesting climbing or skiing. A classic example is Rainier’s Mowich Face, which is sometimes “in” for climbers in October and early November, a time during which other routes are very rarely climbed. Another great example is the Gibraltar Ledges route, which ascends directly to the summit from Camp Muir via a series of ledges that are only good for travel when snow covered: this route is usually climbed during stable high-pressure windows in January.

However, Mount Rainier’s main climbing season is May through September. These are the months in with the vast majority of ascents take place, and the months in which Alpine Ascents guides the greatest number of trips on the mountain. Within these months, we overall experience low to non-existent avalanche danger, drier and warmer conditions than the other nine months of the year, and an ideal window in terms of snow depth on the mountain.

We tend to call May and June “early season” on Mount Rainier. Early season conditions are typically marked by cooler and wetter conditions with more snow on the ground. However, May and June are also marked by a quieter climbing scene and on average more direct routes to the summit. May in the Muir Corridor often sees us ascending the Ingraham Direct route instead of the Disappointment Cleaver. This can cut as much as a mile off of the ascent distance, with consistent, even, 100% snow travel conditions underfoot.

In late May, we start to climb the Emmons and Kautz Glacier routes. These “first of the season” ascents are interesting and special, because the routes are quiet and routefinding is an adventure. For those looking ahead to Denali climbs or personal expeditions, early-season Kautz, Emmons, or Disappointment Cleaver climbs are better training than late-season climbs.

In June, we typically see a shift to warmer conditions, although precipitation levels stay similar. Some snow melts off lower on the mountain, allowing progressively more approach shoe use as the month rolls on. In the Muir Corridor we shift from the Ingraham Direct to the Disappointment Cleaver when the mountain dictates, but the Cleaver is still largely snow-covered making for easier travel. The upper mountain is also at it’s most direct, offering more un-melted snow bridges for a more direct route to the summit. On the Kautz, the route rapidly become more technical as snow melts off revealing the ice beneath. The Kautz is a fantastic climb throughout our guiding season, but later season climbs tend to offer more bare ice for those looking to test their tool-swinging skills. On the Emmons, the route is usually well traveled and thus more straightforward. On the approach to the Emmons Glacier, there is usually been a good quantity of melt-out allowing for mellow travel into Glacier Basin in approach shoes.

July and August are considered “mid-season” or “main season”. Routes are well beaten in, the weather tends to be warmest and driest, and most independent climbers are climbing during these months. Trails are melted out significantly, wildflowers bloom, marmots romp, and there is the most sunshine of any months of the year.

In July, the first week or so usually marks this switch to summery conditions. Though 2019 provided an exception to a 3+ year trend, the first week of July usually sees freezing levels jump up warming the mountain, and stable, dry high-pressure systems moving over the Northwest. The Emmons, Kautz, and Disappointment Cleaver are typically very “in” during the month of July. Each route is at it’s middle condition, where routes are often relatively direct, but some melt-out means there are interesting features (crevasses, seracs) to navigate through or around.

In August, depending on the summer’s temperature trend, we start to experience even more melt-out on routes. We typically stop climbing the Kautz by the beginning of August. This is due to a very broken up Nisqually Glacier approach, the steepest/iciest conditions in the ice chute, and a broken-up upper mountain from the top of the ice chute to the summit. We also typically stop climbing the Emmons during the first week of August, as the mountain becomes trickier to navigate due to hardened blue ice, opened crevasses, and trickier approaches. In the Muir Corridor, August brings the easiest approach to Camp Muir with approach shoes worn almost the entire first day. Some years, the route to the summit remains relatively direct from the top of the Disappointment Cleaver. In other years, the route corkscrews from above the Cleaver around towards the Emmons Glacier. Everything depends on where the mountain’s big glaciers shift and crack.

September is considered late season on Mount Rainier. While we often have nice days on the mountain in September, the weather tends to be rougher, with a stormier overall pattern. The mountain is still “dry” from the summer snow melt, meaning that the glaciers are maximally exposed. Temperatures are typically warmer than May, although certainly colder than the preceding two months. We often see dustings of snow show up as storm systems pass through. Up high on the Disappointment Cleaver route, conditions are typically at their “most interesting” of the season. We see the greatest number ladders and boards in place, sometimes requiring fixed lines, running belays, and of course sharp crampons to bite into the hard glacial ice. It’s a great month to climb if you’re keen to practice your footwork or are looking to build up to more technical climbing. The shorter days and less stable weather lead to jaw-dropping sunrises and sunsets, and the quiet feeling on the mountain can give a more intimate feeling. September is the “twilight” of the climbing season, and some relish being one of a final few to climb the mountain for the season.

All of the above said – Mount Rainier is famous for surprising climbers with weather, conditions, and shifts in glacier topography. Though the trends discussed above can indeed be called trends, we see exceptions to these trends each and every season. A single storm system can change the freezing levels by 8,000 feet or more, and we can see single-day changes in wind speeds in excess of 40 miles-per-hour. A single week of hot temps and sunshine can add a mile-long re-route due to a collapsed snow bridge or serac, while occasionally a seconds-long glacial shift can bridge a problem area to save 30 minutes of climbing time. In two-week periods, routes like the Kautz can also go from “one axe” climbing to “two tool” climbing if snow melt is severe.

In summary, use this article to guide when you might choose to attempt Mount Rainier…but never forget that mountains and weather are wild, unpredictable forces.