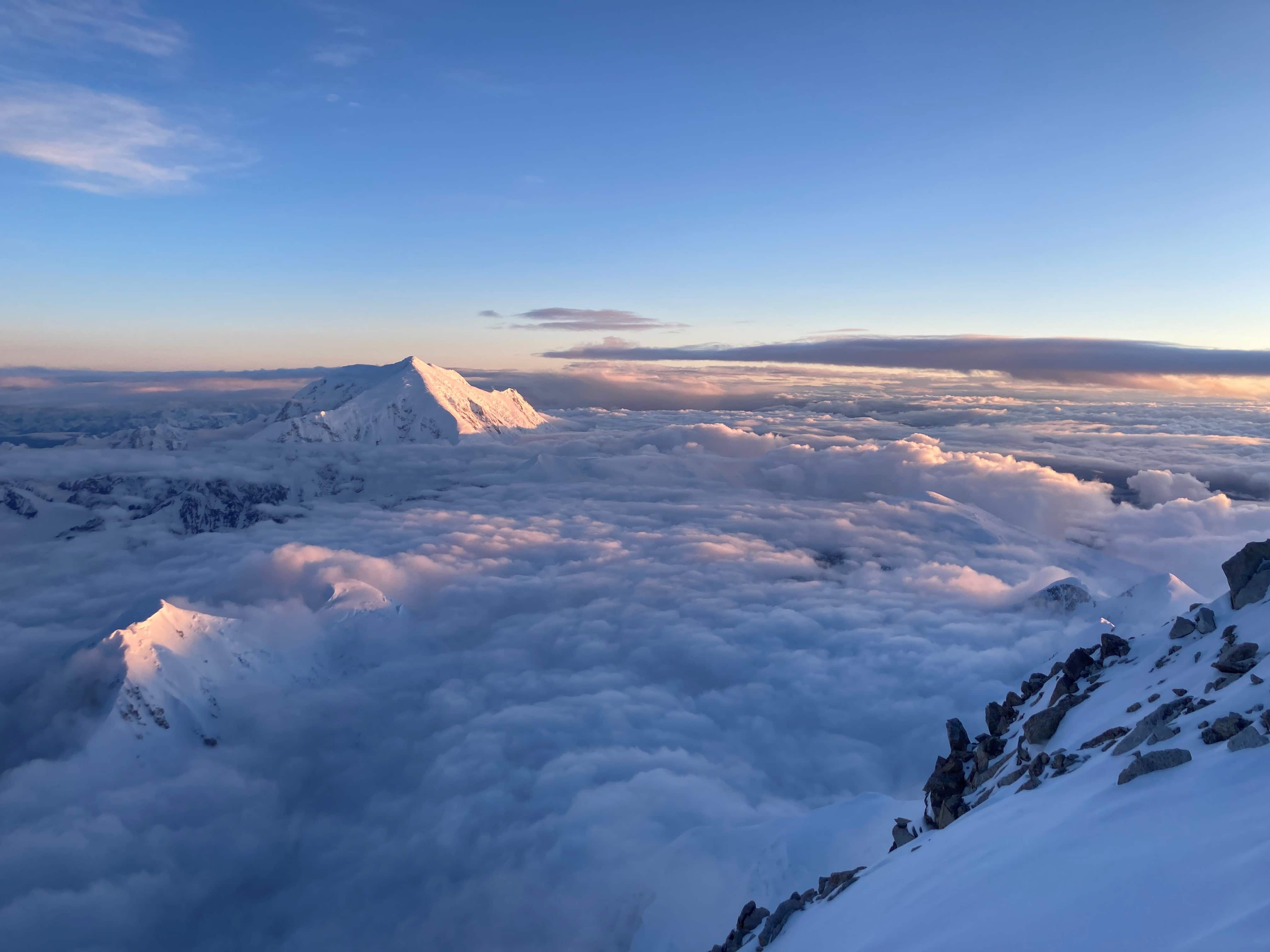 Climbing in the Alaska Range in late spring sometimes feels like stepping into another world. The endless daylight, and the sheer contrast of Denali towering over the rest of the state gives it an atmosphere like no other. For the last decade, Michael Gardner and I have stared down from the upper reaches of Denali, out to the green tundra stretching endlessly to the north. From up high, it looks inviting -seemingly flat green stretching to the horizon, dotted with countless reflective ponds and lakes, offering a stark contrast to the ice, rock, and cold of the upper mountain. We have always been curious about what it would be like to travel through this foreign landscape, and, inspired by early climbers who walked in and out of the range in the days before airplanes, planned an epic traverse. Up the Cassin Ridge, over both summits of Denali, and down the Pioneer Ridge to the Muldrow Glacier, where we would make our way out to the road via the standard route from Wonder Lake.

Sounds simple, right? That’s what we thought, until a force of nature stepped in the way. This winter, the Muldrow Glacier surged for the first time in over 50 years, advancing several miles and transforming the surface into an impassable maze of crevasses. Upon arriving in Talkeetna, we stared dismayed at the photos taken by our friends at Talkeetna Air Taxi. There was no way a person could travel through that mess. There is always a certain level of improvisation when climbing in the big mountains, so we set our sights on other objectives. Next year, we thought. Both of us went to work on the West Buttress of Denali, where we encountered (surprise) challenging weather and conditions. However, along the way up, our friend Adam Fabrikant mentioned an intriguing possibility. The Northwest Buttress of Denali, rarely climbed but visible at many points on the W Buttress, had never been skied but had been described as “probably do-able” by someone we (sort of) trusted. This was enough to get the gears turning, and, upon completion of a successful trip, we spent our few hours in town gathering as much information as we could on the route, which it turns out was not much.

Adam, whose ski partners were all not able to make it for various reasons, was very keen to check out the north side with us. However, while he is an excellent skier, he lacks experience on technical terrain in the high mountains. We figured that wouldn’t be too much of a problem though since his confidence on skis would come in handy on the way down. So the team was formed, but upon arrival at basecamp, we were greeted by a one week storm that came in warm and wet. It was practically raining for many days, and the glacier was transformed into a sloppy mess. Finally, however, the clouds began to part, it started freezing at night again, and we received a perfect weather forecast lasting 2 to 3 days. Go time!

At midnight on June 12, we began skiing up the East Fork of the Kahiltna Glacier, and several hours later, we found ourselves switching from skis to crampons as we climbed up and over Kahiltna Notch to the start of the Japanese Couloir. This is one of the cruxes of the Cassin, and while I climbed first, breaking trail, Michael would fix a rope for Adam to self-belay the hardest sections. In this way, we managed to move efficiently and safely. After several mixed pitches, we found ourselves in very deep snow, and we were grateful for our numbers as we switched out trail breaking all the way to the top of the hanging glacier. Here, we set up our tent, melted some water, and relaxed for around 8 hours through the heat of the day. As the sun set, we resumed climbing. The rock quality was excellent, and although the deep snow slowed our progress, we soon found ourselves above the technical climbing, and into the “hypoxic cardio” section of the route.

For various reasons, we elected to set the tent up again at around 18,000 feet. It was brutally cold, but we huddled together for warmth, and finally the sun came around again. Rejuvenated from our catnap, we hiked up to the main summit in just a few hours. It is always an amazing feeling to emerge from the South Side of Denali onto the familiar and well-worn track of the West Buttress. The relief you feel knowing that you are on the right side of the mountain to return to civilization is difficult to describe, but this time we had different plans. We strapped on our skis, and with a shout were off, arriving at Kahiltna Pass seemingly 5 minutes after beginning our descent. There, we ran into our friend Colby Coombs, whose psyche for our adventure gave us new energy. Switching shoes once again, we cramponed and hiked up to the rarely visited North Summit. Here, exhausted, we were rewarded with perfect weather, and glimpses down the massive Wickersham wall. It was so warm that Michael and I took our boots off and dried out our feet – a first for me above 19,000 feet on Denali!

Soon, however, it was time to go down. We skied together down ice, wind board, and sastrugi through the upper mountain, but soon the snow began to pile up. First boot top, then knee deep, then the occasional section of waist deep powder had us hooting and hollering down thousands of feet of incredible skiing. Unfortunately, however, blue ice lurked underneath, and as the snow got shallower, the skiing became more treacherous. Just as the route finding got the most complex, a whiteout moved in, and without visibility we were forced to downclimb around 500 feet of hard ice before switching to skis once more. Taking advantage of a break in the clouds, we skied quickly through what was becoming isothermic glop down to the Peters Glacier. Along the way we found running water, and gratefully re-filled our bottles.

Down on the glacier, we could finally relax. Although we were far from home, it had only taken a little less than 6 hours to descend over 12,000 feet of complex terrain. Going that quickly down into warm temperatures and thick air was like eating a full meal and getting a night of good sleep. We laid on the rocks, soaking in the last rays of sun, and took stock of the difficulties ahead of us. First came the upper Peters Glacier, notorious for its sneaky crevasses. We roped up for this section, but quickly glided across without incident. Next came the Tluna Icefall – a spectacular jumble of seracs that we were able to ski around on simple snow slopes. Finally, we came to the lower glacier, where we were delighted to find bare glacier ice that had perfect glide. By linking together stretches of bare ice, we were able to ski 10 miles of glacier in a little over an hour – an incredible bonus! Although it was by now 4 AM, we were psyched up. Seemingly only 20 miles to go, we could smell the barn, and changed into our running shoes for what we thought would be the home stretch.

It was entirely surreal moving from the ice and snow to the rocky moraines, and finally, the green grass of the tundra. Travel was smooth at first, but as we dropped down lower onto the tundra, things became a bit more real. Giant Grizzly Bear tracks greeted us every time we saw a mud patch, and the mosquitoes rose with the sun, soon reaching densities we hadn’t ever experienced. In stark contrast to our night out on the Cassin, the sun now beat down with terrible intensity, but we didn’t dare expose any skin to the bloodthirsty bugs. The miles ticked by slowly, and seemingly no matter how fast we walked, Turtle Hill didn’t appear any closer. As we walked, the ground became more swampy, and soon we stopped trying to avoid the water, and simply splashed through it. While getting water, Adam was entranced by a giant beaver that slapped it’s tail aggressively and swam back and forth in an agitated manner. While we walked, two final cruxes loomed over our heads. First- for all his other talents, Adam is unable to swim, and the McKinley River crossing is notorious for being deep and swift. And secondly, although we weren’t sure, we thought the final bus of the day left at 5 PM, and missing it would mean a long, buggy night in a firstlight for three smelly guys.

Luckily, each river crossing never got deeper than mid-thigh, and we arrived at the trailhead at 4 – scarcely half an hour before the final bus of the day. Hilariously, as the bus driver pulled in at top speed, he narrowly missed our pile of gear, and managed to completely destroy one of my ski boots. I didn’t mind, though – 64 hours on the go, with only a few hours of sleep, and it was finally over. The bus ride took 6 hours, and we slept most of the way, but finally we arrived at the highway, where a young AMS guide made the impressive move to pick us up with three large pizzas and a case of beer. The pizzas disappeared quickly, but we didn’t make it far into the beer before we were fast asleep once again. Around 1:30 AM, we pulled into Talkeetna, disoriented and groggy, but with just enough wits about us to drag our weary bodies into the Fairview for last call, the logical conclusion for any endurance effort. The whole experience was a whirlwind of emotions, fatigue, and surreal wonder at our surroundings, but mostly I’m just grateful to have spent two unforgettable days with two great friends.