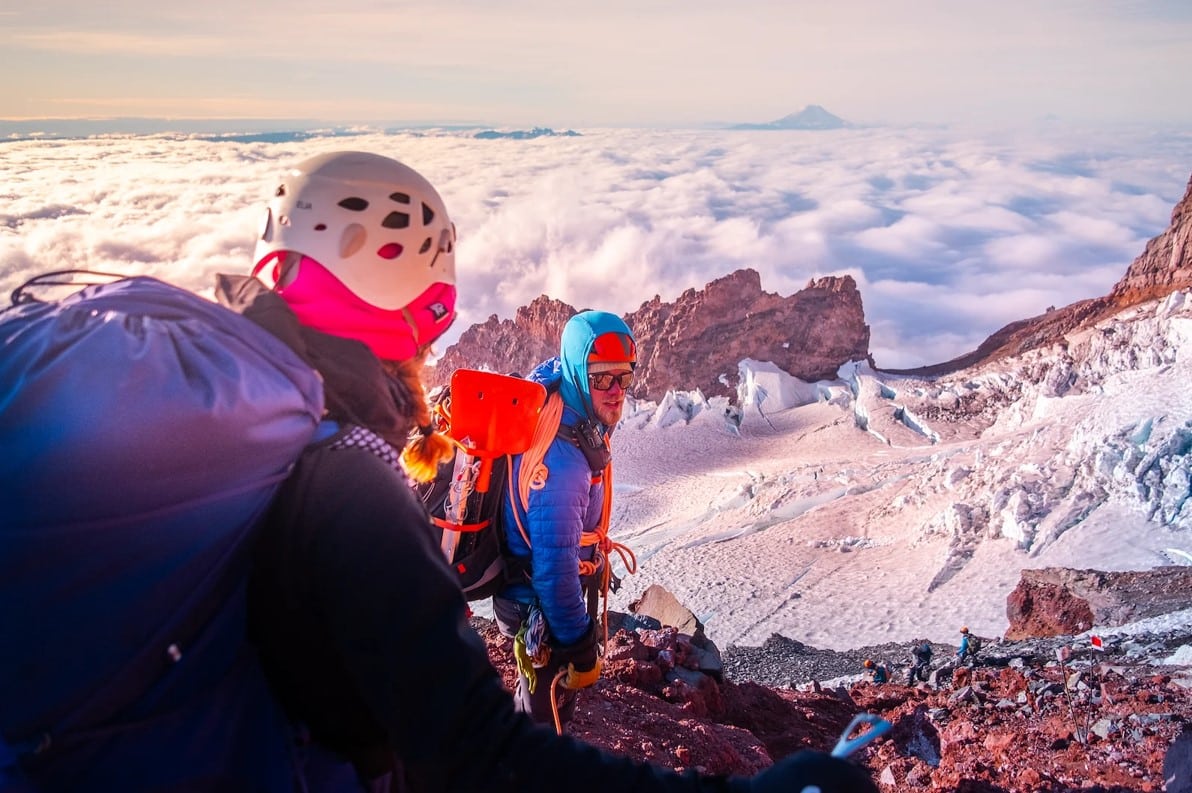 I keep hearing that the route to the summit of Tahoma (Mount Rainier) changes over the course of the season. I have a pretty good idea of what you mean, but…would you mind explaining it? Asking for a friend.

Your friend brings up a great question! When you hear chatter about “the route” in the context of Tahoma (Rainier), it’s likely in regards to the popular Disappointment Cleaver – Ingraham Glacier Direct route, which is commonly referred to as the ID (Ingraham Direct) or DC (Disappointment Cleaver) depending on which variation we are climbing. This route is the most popular route to the summit. Our bestselling 3-Day Muir Climb spends one night at Camp Muir and then climbs the mountain via the ID (early season) or the DC.

The Disappointment Cleaver: Context for the Climbing Route
Before we get into it, a little context. Roughly 75% of all summit attempts are made via the fabled DC. This is the only route marked and maintained by guides from Alpine Ascents in partnership with the other two concessionaire guide services. The DC route holds a unique position in North American mountaineering history – a true feat of human engineering. It sees a level of work and manufacturing unheard of outside of the Khumbu and lofty peaks of the Himalaya and the French and Swiss Alps. In a similar vein to the icefall on Everest, only through hard work, countless hours of shoveling, and a handful of ladders is the DC transformed into a route that is guidable for new climbers for nearly the duration of our Cascades climbing season – May through late September.

The DC is the only climbing route in Washington where guide services are permitted to leave fixed pieces of gear (ladders, fixed lines, pickets for running belays etc) referred to in guide speak as “route adjuncts” on the climbing route. Just around the mountain on the Emmons Glacier, guides and climbers must remove all climbing equipment – wands, pickets, ice screws, etc. at the conclusion of the climb. If crevasses open up on the glacier that climbing teams can’t end-run, it’s game over. No ladders allowed! This is the reason why our Emmons climbing season is so much shorter. Our last Emmons climb of the 2023 season launches on August 2 compared to September 28 for the 3-Day Muir Climb.

The Route Through the Climbing May – September Season
Now that we’re on the same page about why the DC is so special, let’s dive into how the route changes over the course of the season. We are going to limit the discussion to terrain above Camp Muir, but a quick note before we set our sights up high. Despite having “snowfield” in the name, the Muir Snowfield feature is actually a very real glacier, cored with blue glacial ice above 8500’. While the crevasses are small by glacier standards, by late season they can open up in specific areas.

From the Alpine Ascents High Camp at Ingraham Flats climbers take the same general line as they would to DC. Instead of turning right and traversing to the Cleaver at 11,500’, the ID switchbacks a few times up the Lower Ingraham Headwall, trending uphill to a heavily crevassed region. A climbable path through this maze of crevasses generally determines if this route is guidable or not. Around 12,200’ the route heads either climbers left to Camp Comfort or climbers right , navigating to the top of the Cleaver meeting up with the standard DC route at 12,300’.

How long we climb the ID is based on the snowpack! Many years the ID becomes too heavily crevassed by mid/late-May and guide services pivot to the DC. In 2022, we had a massive snowpack in the Pacific Northwest. This beefy snowpack coupled with a stormy May and early June, kept guides climbing via the ID into mid-June. It was wild!

The Many Faces of the DC

After the ID becomes too heavily crevassed, we switch over to the DC. If you want to take a very deep dive into the nuances of this climbing route, we suggest reviewing the NPS Disappointment Cleaver Route Guide.

As outlined above, guides from the three concessionaires work together to direct and maintain the climbing route over the course of the climbing season. Route maintenance can look like shoveling and widening the boot path so climbers can have more stable footing, securing a ladder (or two) over a crevasse, or adding a fixed line on a steep traverse to add security. From the point we switch over to the DC, guide services are constantly tinkering with the climbing route as crevasses melt out and start to open up. While there is risk inherent in mountaineering, guide services try to minimize that risk through careful route selection such as avoiding prolonged periods of overhead hazard where climbers might be at risk for rock and ice fall.

Through the hard work of the guide teams, the route constantly changes from one day to the next, moving in concert with the shifting crevasses. During the course of the season the route may change 25+ times. Early in the season where there is still plenty of snow and strong snow bridges, the route can often be fairly direct with minimal ladders. As the mountain melts under the summer sun, the climbing path begins to wind through mazes of crevasses, often requiring multiple ladders at different points and sometimes multiple ladders lashed together. The summer of 2021, we had a triple ladder at one point on the route!

Late Season can be Tricky
When the route becomes increasingly convoluted, it also becomes longer and the roundtrip time to the summit from our high camp (Flats Camp) can increase by hours. When the route is climbing long, guides need to be more selective about which climbers can safely make a summit attempt. A climber with marginal fitness may be fine on a direct early season climb, but when the days are shorter and the climbing route is longer, this may no longer be the case. If you are signed up for a late season climb, it’s even more important to put in the work training and preparing for your trip.

When the route no longer connects to the summit, we refer to it as “the route going out”. This can happen for many reasons, such as crevasse bridges opening. Our guide team (along with other guide services), will work to find a route variation or new route. While we are quick to respond ( the response time is also weather-permitting) there may be multiple teams that do not reach the summit while the route is out even if the weather is favorable. Like the weather, we don’t know when the route will go out and how long it may take to repair or find a new route. We have often repaired the route in 1-2 days, but longer outages are not uncommon. Our feedback from climbers, when the route “goes out” has been overwhelmingly positive because we can provide different options short of a summit attempt. Sometimes we climb as high as we can and poke around or spend a day working on skills like ice climbing.

The increasingly common hot, dry Pacific Northwest summers can cause the climbing route to melt out to the point that even with ladders, shovels, and all the combined experience and knowledge of the three guiding companies, we can’t manufacture a climbing route that is appropriate for the experience level of of our climbers and therefore the climbing season for guided climbers will end early. After the final guided climb, guides pull all the ladders, fixed lines, and other adjuncts, storing them at Camp Muir for the following season.

While we can yammer about the route all day long, that should be enough information to appease your friend. We hope to see you both on a climb sometime soon. If you have your sights on the DC, we recommend mid-June to mid-August for prime climbing conditions.

See You in the Mountains,
Alpine

Still have Tahoma on the brain?  Check out our other blog posts.